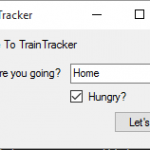 This is a guest blog post by Pepijn Mores, a student at HELMo Saint-Marie. In this blog post he shows how easy it is to create an app to fulfill his own transportation needs, which we thought is very interesting: it is not always the big companies that use the data from the SNCB. Would you like to write a blog post here yourself? Contact us!

For the final project of my C# course at HELMo Saint-Marie, I had the opportunity to choose my very own topic. Only two requirements needed to be met: it had to be developed in C# (obviously) and it had to involve a technology we didn’t study in class. The amount of possibilities was enormous , therefore I decided to search for a subject that would actually be helpful to me in some way. Because I return home every weekend and the train takes about 1,5h, I came up with the idea to make an application for my PC that would look up the train tables and check if I had enough time for a sandwich at Panos at one of the changes. It was the perfect solution for me to look up the trains when I was attending my last course on Friday afternoon, so that I could plan my trip home whilst sitting in class. So that’s where the API of iRail came in. 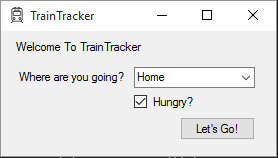 END_OF_DOCUMENT_TOKEN_TO_BE_REPLACED

Today, the Belgian railway company announces a data sharing program for third party developers. They will start sharing the planned schedules (“static data”). We are cautiously excited that this is the first step towards a real open data policy.

You can request your own 1-on-1 contract via http://www.belgianrail.be/nl/klantendienst/infodiensten-reistools/public-data.aspx. We hope to make our own version, linked to our identifiers, available through http://gtfs.irail.be soon!

What does this mean for the end-users?

Companies like Google, Nokia, Microsoft and others can now start reusing the data if they negotiate a one on one contract. Starting today, you will see route planners from third parties work with NMBS/SNCB! Android and Google Maps users will be very excited as they now will also see trains suggested to their destination instead of only buses when selecting public transit.

Why isn’t this open data yet?

For once and for all: data sharing = you can negotiate 1 on 1 contract. #opendata means open for everyone – http://t.co/7YcaUph3Io @nmbs

Open Data means that there’s no discrimination in who can reuse that data and that there’s no restrictions in in what way it can be used and redistributed. For now, you can access the data after signing a 1 on 1 contract. We think it’s a good thing NMBS/SNCB is testing the water before the law that will oblige NMBS/SNCB to do real open data comes into action in 2016. We look forward working together and iRail is as well in the process of requesting a license. We however want to be able to republish the data once we added our data to the dataset, which now isn’t allowed by default.

Why is iRail (cautiously) happy?

We once were forced to stop building applications using the data of NMBS. The original posts from 2010 can still be found in our archives. Today, the first steps towards Open Data have been taken and we are sure they will not regret it. We will slowly migrate our servers to make use of this official dataset. We look forward to seeing you build awesome new things with this high quality data!

Since the disappearance of Railtime, the official NMBS/SNCB app was the only provider of travel information for the Belgian railways I was aware of. A few months ago, I got to know Railer, an initiative of the open data working group iRail. It has been my primary travel app for Belgian trains ever since. Last week, I discovered another app called OnTracks (by Maxime Pagnoulle) that also provides travel information for the Belgian railways. Given my interest in the way we present information to travelers, I decided to do a little side-by-side comparison of these three apps, to see where their strengths and weaknesses lie.

END_OF_DOCUMENT_TOKEN_TO_BE_REPLACED

It’s been since April that we haven’t done another community update. Back then, we announced our migration to new servers, we’ve announced that we would have 2 students at open Summer of code 2015 and that we would start building a GTFS ourselves, as the law would now permit us to do so. NMBS/SNCB will open up their data by the end of this year… but why wait if their data is already on their website?

END_OF_DOCUMENT_TOKEN_TO_BE_REPLACED

Too long didn’t read; we need your help developing stuff. We’re organising a day in September in Ghent to tell you all about it. Grab your ticket on Eventbrite!

1. We want to improve our API and hyperRail webapp. There are a lot of issues open that urgently needs to be fixed. Want to help? Leave a note on our issue tracker for the issue you’d like to fix. (PHP – Laravel – AngularJS)

2. We have created a data dump for the Belgian railway company in GTFS. This has been requested by a lot of people. Yet… We still miss the geolocations of the platforms within a station, and we need a way to find the shapes of the tracks. If this is your thing, please let us know through this issue tracker! (data wrangling)

3. Discuss the next steps of http://analytics.irail.be – source code: https://github.com/iRail/analytics (nodejs)

If you’re interested in reusing the data, such as the API, the GTFS files or the GTFS-RT, we’ll be glad to give you a tutorial that day.

We’ll explain everything, in person

Where will we do it?