Since the disappearance of Railtime, the official NMBS/SNCB app was the only provider of travel information for the Belgian railways I was aware of. A few months ago, I got to know Railer, an initiative of the open data working group iRail. It has been my primary travel app for Belgian trains ever since. Last week, I discovered another app called OnTracks (by Maxime Pagnoulle) that also provides travel information for the Belgian railways. Given my interest in the way we present information to travelers, I decided to do a little side-by-side comparison of these three apps, to see where their strengths and weaknesses lie.

The main reason to use a mobile travel app is to quickly find a route to your preferred destination. That’s why I think the home screen of such an app should immediately provide fields to enter the name of a location. The NMBS app however shows a kind of home screen, with shortcuts to departure times, routes, trains, and tickets, among others. You never really need this home screen, as there always is a bottom navigation bar (and the home screen can only be accessed again via this bar), so this is completely useless. A better solution might be a menu that slides over the screen, for instance one like in the NS (Dutch railways) Reisplanner app. The funny thing is that, once you have used the NMBS app, it starts up with the screen you last accessed, so you (fortunately) never see the home screen again. In general, the app feels quite old and unintuitive, and I don’t think it has had a thorough refresh since its first inception. 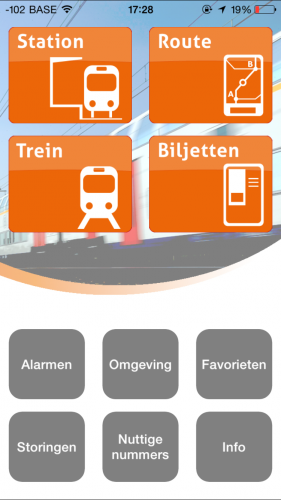 Railer and OnTracks do not feature a home screen, and they don’t need it either. Their interface looks simple at a first glance, and that’s good. Railer features just a very clean, white interface, which I find easy to use but which maybe looks a bit boring. OnTracks decided to be a bit more creative and shows a turquoise interface on a fuzzy black-and-white picture background. This looks nice, but after using it for a while I started to get annoyed by it. One big minus for OnTracks is that it shows ads, which distract you from your planning tasks. 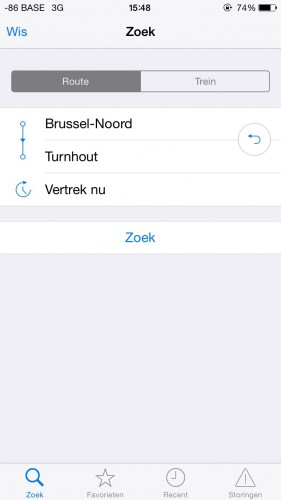 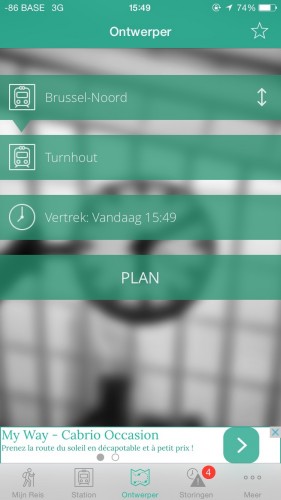 On y va: getting somewhere

Finding a route goes practically the same in all apps: you enter the origin and destination, you specify the time you want to depart or arrive, and you hit ‘search’. There are three main ways to speed up inserting the origin and destination: suggesting nearby locations, using favorites, and showing recent destinations. OnTracks is the only app that does this completely in once screen, all at once. When you attempt to enter a location, it pops up a window in which you can either hit the search bar, or quickly choose from ‘nearby’, ‘favourites’, or ‘recently chosen’. This is very helpful. 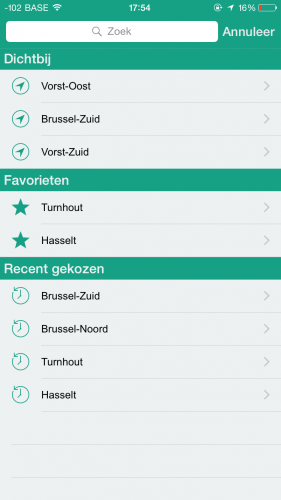 OnTracks has an easy way of adding a station

Railer however shows a window with three panes: an alphabetical list of stations in which you can also search, a favorites list, and a recents list. Having to consciously choose in which pane you want to find things (“have I recently used it, is it one of my favourites or should I just type in the name?”) is a bit cumbersome and could definitely be made easier. At this moment, Railer does not use your location for searching stations yet, but this would normally be added in version 1.4, currently in beta.

Once you entered all your stuff, the app presents you with a list of possible train connections, ranked by time. The NMBS app shows icons for the type of train and their identification (for instance ‘IC 3115’), the departure, arrival and travel time and the number of changes needed, as well as the time remaining until departure. This is all very helpful information, but it looks cluttered quickly.

Railer uses a more minimalist yet functional style, with the departure and arrival times, the number of changes, and the destination, type and platform of the first train on the journey. This is especially helpful when you’re already in the station and quickly need to make a decision about what platform to sprint to, as I’ve experienced myself. Nevertheless, it’s strange that Railer does not show travel times in the overview list, while this is my main decision factor for which journey option to choose. I could keep subtracting departure from arrival time, but why can’t my damn smartphone do it for me? Another very small point of critique for Railer is that the ‘switch origin and destination’ icon looks more like an ‘undo’ button to me, which was a bit confusing in the beginning.

OnTracks’ overview list is clean as well, but if your train does not have any delays yet, the empty fields for delays look a bit weird. All three apps show journey options in a textual way, but another option would be to use ‘timelines’ that give a more visual representation of possible journeys. Travel apps like Qixxit (only in Germany) do this already.

Once you have chosen your connection, you can choose to put it in your calendar (NMBS and Railer) or to ‘subscribe to’ or pin the journey (NMBS and OnTracks). When having subscribed or pinned, I expect that the app sends notifications when your train is delayed, but as my journeys of the last days went quite smooth (surprise!), I haven’t had the chance to test this. I should add that the ‘subscription’ feature in the NMBS app seems a bit vague. You can choose how much in advance you want to be notified and for which amount of delay, but the wording is a bit strange (‘subscribing’ also feels like you would use it every day) and I’m still not completely certain about its functions. In Railer, there isn’t a way to ‘pin’ your connection yet, and the ‘share’ button in the info pane of your journey appears to be inactive at the time (but it isn’t for a specific train ride). Resolving this would be a nice addition to the app. 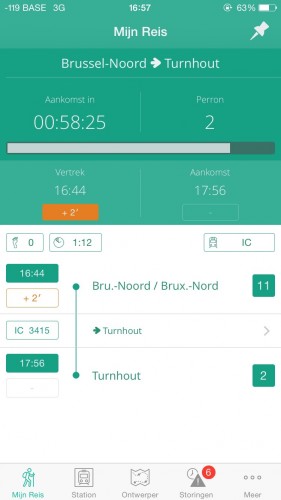 OnTracks: ‘My Journey’ monitors your trip

A nice addition to OnTracks is the ‘My Journey’ pane that gives a clear overview of the connection you’ve pinned, including a progress tracker that shows the time left until departure/arrival and the possible delay you’ve gathered. The NMBS app also shows some kind of progress tracker when selecting a particular train connection, but Railer doesn’t. Nitpicking: as I’m a bit of a freak, I like to know what the wait times in intermediary stations are (I don’t like standing still), but Railer and OnTracks only show arrival times. Also, why do these apps open a new pane for the list with intermediary stations, when this list could just expand and collapse in the connection detail window? Every lost millisecond is precious, my friends.

The second most important thing for a train travel app is, to my opinion, a quick overview of departures or arrivals at a particular station. All apps feature this, but in Railer it’s a bit hidden: you can just put an origin station in ‘Start’ and choose ‘Search’ to show all departures at this station. This does not work for arrivals however, and could easily be added. Another idea might be to dynamically show departures in the route search window for the station you specify in the ‘Start’ field, without needing to hit a search button. If the search engine is quick enough (all three apps seem to be quite fast), this could also be done for immediately showing journey results. Every tap removed from a traveler’s life is a victory.

In other news, all apps provide interruption information in a separate window. The NMBS app also provides the possibility to buy a ticket, but does this in a very complicated way, and the ticket gets sent in an sms. In times of QR readers and Passbook, this has become quite old-fashioned. Additionally, all apps feature the possibility to search for a particular train, but I have never really done the effort to memorize four-digit train numbers, so I haven’t used it so far.

A positive aspect of the NMBS app is that it includes all other public transport options in Belgium and accepts addresses as location input, so you can plan your journey from door to door (unless your bus is too late, because the app does not keep real-time information for other transport than trains). I recommend you to check out Citymapper for door-to-door travel information too, but it does not provide real time information for transportation other than Brussels’ MIVB/STIB yet.

In the end: conclusion

There was a lot of outcry for the removal of the Railtime app recently, but I had never been a big fan of it anyway. Nevertheless, I think there should be choice in the travel assistant you want to use, and this implies that public transport operators need to open up their data to third party developers. That’s why I like iRail and Railer, because I see the project as a ‘fuck you’ to NMBS/SNCB as long as they don’t provide a well-performing application.

Railer and OnTracks both are very good, even better alternatives to the NMBS app, with interfaces that are way ahead of their competitor. When the two are compared to each other, OnTracks seems to get the upper hand in functionalities, with a more efficient way to insert stations into routes and a nice ‘My Route’ feature. Nevertheless, I like Railer’s no-nonsense interface and the fact that it doesn’t have advertisements. I believe there are some easy wins that can be made for Railer if extra functionalities are added.

In the long term, adding other public transport options would be extremely helpful, as well as letting the app evolve into a real ‘assistant’ that helps you with every step of making your journey: deciding where to go, finding a way to get there, buying your tickets, monitoring your trip and looking for alternatives when disruptions arise. These are exciting times for mobile travel assistants, and I’m looking forward to what comes next.