Tomorrow it’s the Open Belgium 2017 conference. We are hosting a session on the state of play of Open Transport Data in Belgium. We look forward to welcoming Arnaud Wattiez from SNCB, Sébastien Goffin from STIB and Bert Van Hemelen of De Lijn, who each will give a presentation on their recent activities and plans on the Open Data domain. Afterwards, Peter Defreyne (Antwerp Management School) and I will ask questions to the panel to discuss the next steps.

Of course, many of these datasets are also available through the iRail API under the CC0 waiver, or through our unofficial GTFS dumps at gtfs.irail.be. We are only a third party that gives out data without warranty and can not guarantee sustainability (we are online for 9 years this year though). Whether iRail is legal remains in the gray zone for the time being: we believe there is no sui generis database law applicable on the data. However, much depends on the intention of the public transit companies themselves as well: do they want to stimulate their data to be picked up for maximum reuse? The quality of the open data would raise tremendously when the transport companies would publish official Open Data.

State of Open Transport Data in Belgium in 2017

After all this time, I’m still impressed with TEC. They are not going to be at Open Belgium 2017 tomorrow. They said: “we will not be able to tell you something new after being at Open Belgium 2014 and 2015”. They provide both historic dumps as their currently planned schedules for entire Wallonia. Providing historic schedules is very relevant for e.g., mobility studies: how is the mobility of a certain area evolving? This is not possible at any of the other data providers.

In each case, TEC gots it right with http://opendata.tec-wl.be/. With its simple and pragmatic Open Data portal, it is a frontrunner in Belgium for a couple of years now. They also have plans to open up their real-time datasets.

You can request access to the files of SNCB, STIB and De Lijn, to both the planned files as to the real-time data (at least, soon to come with SNCB). In each of the cases, a non-open contract needs to be signed. There we call this data sharing, and not Open Data. Apart from their licenses not being compliant to the Open Definition, we can also see practical issues with this data for use within a Web ecosystem: when added to an open data portal, it cannot directly link a machine to the files. 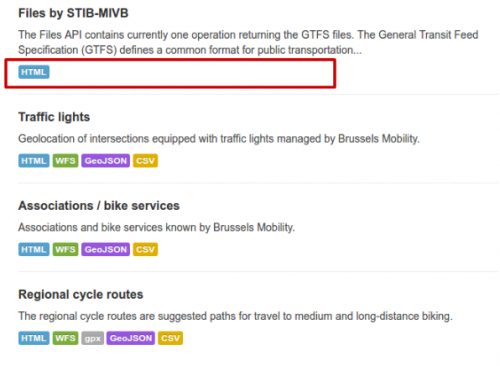 Next, we also do not want transport agencies to open up an API for e.g. real-time data. We want them to share the raw data files needed to create APIs. APIs are often rate-limited, which defeats the purpose of maximum reuse and rewarding successful third parties. When real-time data needs to be shared, a couple of files that update each 30 seconds is still easy to host and provides the flexibility to third parties to implement any use case, instead of being heavily tied to the functionality an API exposes. The MIVB-STIB at this moment have the most complex system to reach the data itself, with API keys and rate limits on top of simple data files.

Yesterday, the news broke the SNCB is giving a monopoly to Olympus Mobility on their ticket reselling. Also with iRail we already requested access to reselling tickets, as this is the only feature why people still use the SNCB app over apps like Railer or BeTrains. Alexander De Croo, who also will be speaking tomorrow, agrees with us: open data reusers should become partners in ticket selling instead of competitors. Tomorrow, we will ask Arnaud Wattiez from SNCB to elaborate on this: are there plans to give others access to ticket reselling, just like De Lijn is already doing?

In each case, tomorrow will be a day where we will learn a lot about the future of Open Transport Data in Belgium from the transport companies themselves. See you there!